The record-breaking ride, Red Force, has just been unveiled at Spain’s Ferrari Land – and is designed to give fans a taste of Formula One... 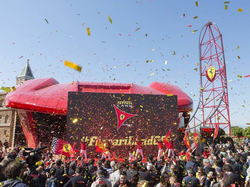 Have you ever wanted to know what it’s like to experience the speeds that Formula One drivers contend with every race? Now you can nearly understand, with a visit to Ferrari Land in PortAventura World, in Costa Dorada, Spain. The theme park has just opened and will feature 11 attractions, including an immersive Ferrari Experience, race simulators, bambini-sized race cars, a selection of Italian-themed dining options – and the continental record-breaking rollercoaster Red Force.

At over 367 feet tall, Red Force is taller than the next highest ride – Blackpool’s very own The Big One – by more than one hundred feet. Designed in homage to the famous Italian F1 champions, Red Force also accelerates from 0 to 112 mph in just 5 seconds.

Red Force may be Europe’s undoubted colossus, but when it comes to global gargantuans, even Red Force appears small. The tallest ride stands at a mighty 456 ft, and can be found at Six Flags Great Adventure Park in New Jersey. An even taller ride is also slated for release in 2020 in Orlando.

And despite its jaw-dropping acceleration, Red Force has some way to go before it can match its sister park’s, Ferrari World Abu Dhabi, main attraction, which hits speeds of 149 mph.

If you love finding out the technology behind these record-breaking man-made creations, grab a subscription to How it Works – and save up to 67% off.