Take a Peek at the Revamped 'Uncut'

In an era of flash in the pan trends, Uncut has stood the test of time. Having been in print for an incredible 19 years, it’s about time it had a well-earned makeover! Following the old adage of ‘if it ain’t broke don’t fix it’, the magazine has stayed true to its tried and tested formula, and insists that this is more of ‘sprucing up’ than ‘some vainglorious attempt to capture new readers and alienate old ones.’ 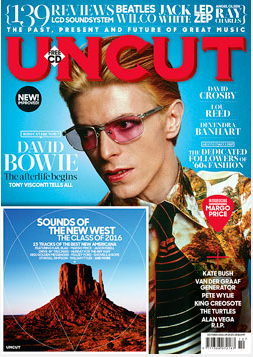 The brand new issue, which is out in the UK on Tuesday August 23, features the king of reinvention himself on the cover, David Bowie, and has a dynamic, brighter new look thanks to the Uncut’s Art Editor, Marc Jones. But the biggest changes are inside, with a bigger reviews section, which features more prominently to ‘make a bigger deal of them’ and more of a focus on new artists, including upcoming country star Margo Price who features on the included ‘The Sounds of The New West: Class of 2016’ CD.

“The shift is also designed to assert a critical part of what we do: tirelessly championing new records, and placing them in the context of the musical traditions that we love, stretching back over 50 years,” said Editor John Mulvey.

The new editorial approach is reflected with the new strapline: ‘The Past, Present and Future of Great Music’ and a promise to ‘Championing new artists and albums while continuing to celebrate the epoch-making music of the past’. In other words: a must-read for fans of Classic Rock and Americana.

If you’re obsessive about rock from very era, grab a subscription to the new-look Uncut