Is the flame-haired firebrand going to make a sensational return to the X Factor alongside fellow original judge Louis Walsh?

Amidst the furore surrounding the apparent break-down of her marriage to rock legend Ozzy, it appears that Sharon Osbourne may well have something to smile about again soon, as it becomes ever more likely that she will return to the X Factor in time for the new series. 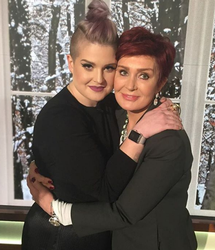 Reports are circulating that media mogul Simon Cowell has reportedly confirmed the return of the red-headed, hot-tempered Sharon to the judging panel, alongside fellow original judge Louis Walsh – who may well want to keep a rain-coat handy, given Sharon’s reputation.

Earlier this week, Sharon laughed off her daughter Kelly’s decision to publish the phone number of the hairdresser who is alleged to have had it off with Ozzy on Twitter.

“Kelly has the best sense of humour ever,” the 63-year-old told The Talk, “And you know what? In cases like this, what can you do but laugh? What are you gonna do – be angry with her because she loves her mum and dad and she wants us to be together?”

“She can do what she wants because she’s an adult,” Sharon continued, “You have to laugh – she is just so funny.”

To catch up with all the latest in the recent Osbourne family outrage, and get a behind-the-scenes peek at the possible X Factor judging line-up, grab a subscription to OK! Magazine – now with up to 52% off.