Model of the Year Damaris Goddrie Reveals All to Elle

Fresh from her triumph at the Elle Style Awards, Damaris Goddrie has now been given the chance to feature on her first UK mag cover, as she appears on Elle’s April issue. The rising star of fashion has caused quite a stir since breaking out into the ranks of most-coveted models, and has already fronted campaigns for Zara, Versus, Coach, Kenzo and Topshop.

Goddrie made her campaign debut with J.W. Anderson in their pre-fall ’15 look book and walked for Moschino, Versace and MGSM at Milan fashion week last year. Still only 19-years-old, Goddrie it set to take the modelling world by storm. 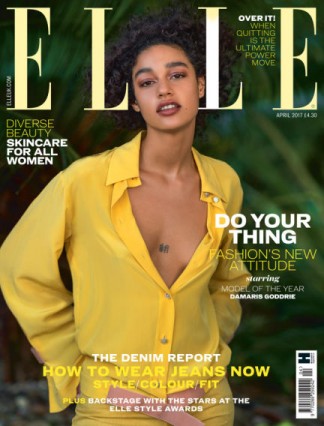 She was first spotted in Antwerp. It was only after being scouted three times by the same agency that Goddrie decided to look seriously at a career in modelling.

I was 16, shopping with my mum, and I wasn't interested in being a model,” she told Elle of the first time she was scouted. “A year later, I was spotted…again while I was eating in a fast-food restaurant. I guess I was ready that time. I wasn't always sure I wanted to model. I was into being curvy and beautiful – not the model 'ideal'.”

Goddrie also talks favourite designers – “I really admire [Stella McCartney]. It can be difficult to have a conscience in fashion, but Stella shows that it's possible.” – and her love of Japanese culture.

“My favourite is Nana, a manga book series by Ai Yazawa,” she reveals. “Before she became a mangaka (a manga artist), she wanted to be a fashion designer, and you can see it in her work. One of the main characters in Nana wears Vivienne Westwood. She looked so cool: as soon as I saw her when I was 13 years old, I was completely sold. I fell in love with Vivienne; her strength of opinion and the way she stands up for what she believes in is inspiring.”

You can still get your hands on the complete interview by subscribing to Elle UK – and you can save up to 41% off today.