After a torrid EURO 2016, and *that* defeat to Iceland, the FA are gearing up to appoint Premier League stalwart ‘Big’ Sam Allardyce as the next national manager… 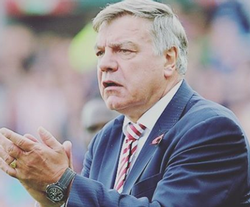 After fifty years of hurt, and some quite spectacular implosions on and off the field, the FA has decided to place its trust in one of the Premier League’s veterans, ex-Bolton, West Ham and Sunderland manager Sam Allardyce.

Allardyce will be officially confirmed as Roy Hodgson’s replacement today at a press conference, meaning that his latest team, Sunderland, will have to begin searching for a new manager before the season starts.

Only Sir Alex Ferguson, Arsene Wenger and Harry Redknapp have taken charge of more games in the top flight of English football, and although Allardyce has never won a major trophy, he has become somewhat of a specialist at turning relegation-threatened teams around – something which may bring hope to the thousands of England fans who were subjected to a series of dismal performances over the course of EURO 2016.

The 61-year-old was first brought into contention for the job back in 2006, after the departure of Sven Goran Eriksson, but missed out on the appointment, with the FA choosing Steve McClaren instead – a decision that did not bear much fruit.

Though Allardyce is known for his tough approach and no-nonsense football, he was one of the first managers in England to pioneer sports statistics as a way of getting the edge over opposition, and has long proved that he has one or two tricks up his sleeve at all times.

If you're a footie fan waiting expectantly for the reign of Big Sam, grab a subscription to FourFourTwo magazine - now with up to 30% off.

Eddie Izzard - The Marathon Man Triumphs
The Big Interview: Meet The Editor Of Angler’s Mail, Tim Knight
Are the Irish the Best Football Fans Ever?