Major Tim Peake to Return After 186 Days Aboard ISS

Everyone’s favourite astronaut Tim Peake will be returning to Earth from the heights of the ISS on 18th June, and since he blasted into orbit six months ago, the Brit has been getting up to a host of envy-inducing activities that are literally out of this world… 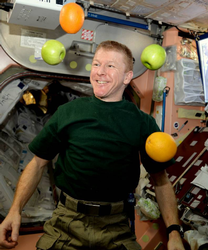 After 186 days spent aboard the ISS, British astronaut and national treasure Tim Peake will be stuffed into a return capsule alongside colleagues Yuri Malenchenko and Timothy Kopra, fired over 100km at 25 times the speed of sound, with outside temperatures reaching 2,500 degrees Celsius, before gently drifting via parachute down to its landing point on the Kazakh Steppe just in time for Father’s Day.

Over the course of his time on the station, Peake has won the hearts of the nations with his extra-terrestrial exploits. Here, as the world prepares to welcome our most intrepid adventurer back to his home nation, are some of his best bits:

On 15 January, Peake became the first ever British astronaut to perform a spacewalk. He stepped outside the ISS Quest airlock to replace the failed Solar Shunt Unit, a component that transfers electrical power generated by solar panels. While the astronauts were successful in the task, the spacewalk had to be cut short after Timothy Kopra reported a leak in his helmet.

Peake joined in the London Marathon from space on 24 April, running the 26 miles in three hours, 35 minutes and 21 seconds on a treadmill set up on the ISS. In completing the run, he became the first person to run a marathon in space.

In February, Peake posted an incredible time-lapse video of a lightning storm taking place over Earth. The 34-second clip showed the storm as the ISS was passing over North Africa towards Russia. "Amazing how much lightning can strike our planet in a short time," he said in the Twitter post.

If all that isn’t enough, Major Peake also got to watch the latest instalment of the world’s greatest sci-fi franchise, Star Wars: The Force Awakens from on-board the ISS.

Tim will certainly return to Blighty to a hero’s welcome, and one Norwich pub has even gone so far as to construct a giant roast dinner depicting his face. He will then be set for a long few months of testing by NASA and the ESA to monitor the affects that space travel had on his body.

“It will take a few days for his head to clear, a few weeks to feel normal,” explained retired Canadian astronaut Chris Hadfield, “a few months to be able to run properly, and a few years to grow his skeleton back.”

For more info on Major Peake’s imminent return, grab a subscription to BBC Sky at Night magazine – now with up to 20% off