As part of the BBC My Generation season, legendary Rolling Stones guitarist Keith Richards will be hosting a series of programmes that document his life, career, influences and the musical generation of 60s Britain... 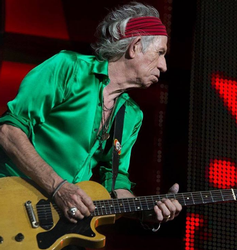 Rolling Stones guitarist and musical legend Keith Richards will be fronting a host of programmes on BBC later this year.

The first, Keith Richards – The Origin of The Species, will be the centrepiece of BBC Two’s My Generation season, whilst in September the 72-year-old six-string maestro will hand-pick two nights of programming for BBC Four which will include documentaries, films and live performances, each featuring an introduction by the man himself.

The BBC 2 documentary, directed by Julian Temple, will explore Richards’ pre-Stones life, and how the British musical generation of the 60s came about.

"Harold Macmillan actually said it - the 'winds of change' and all that - but he didn't mean it in quite the same way,” says Richards, "I certainly felt that for my generation, the feeling in the air was - it's time to push limits. The world is ours now and you can rise or fall on it."

The BBC's head of music TV commissioning, Jan Younghusband, said Richards was an "outstanding talent and an inspiration to us all".

"We are thrilled to be able to bring his unique and entertaining insights to our audience,” she continued, "I know it will be a totally original experience."

For more on all things rock 'n' roll, grab a subscription to Classic Rock magazine - now with up to 82% off.