Lots of people may be going around saying that 2016 has been a terrible year, but at least we got self-service beer taps… 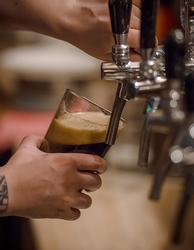 Nobody likes waiting, really. People might say they don’t mind it – but the truth is that waiting, as a practice, will never be high on the list of what people want to do with their day. Especially when you’re waiting for a nice, cold pint in a bustling pub, and the bar staff just don’t seem to be catching your eye, despite your increasingly frantic gesticulation.

Enter Barclaycard – saviour of beer drinkers in a hurry across the country (or in one pub in London, at least).

“I’m sure everyone has been stuck behind the person who orders the most complicated cocktail on the menu or a round of 10 drinks for their group of friends,” Tami Hargreaves, the commercial director of digital consumer payments at Barclaycard, told The Guardian. “When people told us that waiting time was one of their biggest annoyances, we wanted to help solve a common problem with a simple solution.”

Barclaycard’s solution is the ingenious Pay@Pump, a device designed to alleviate the fact that the average waiting time to get our hands around a pint during the Christmas party season is 12 minutes. Combing a tap and contactless card machine, the Pay@Pump will pour a swift pint at the touch of a button, and allow the punter to pay with a deft flick of their contactless card. The handy machine has made its debut in Henry’s Café Bar in Central London, but Barclaycard are hoping to see them roll out across the country in pubs and at music festivals.

If you’ve an appetite for ale or a penchant for porter, grab a subscription to The Beer Connoisseur today – and save up to 58% off. Cheers!