Attendees of Christopher Kane’s London Fashion Week show were left open-mouthed as he sent models down the catwalk wearing Crocs. Yes, you read that correctly, Crocs, as in the rubber, formless slip-on sandal usually preferred by toddlers and those who don’t give a jot about style.

Naturally, the critically acclaimed British designer - who brought us the Galaxy and Gorilla Print and is known for launching global trends - had added his own flourish to the classic plastic clogs which were customised with a special marble print and adorned with natural gemstones. 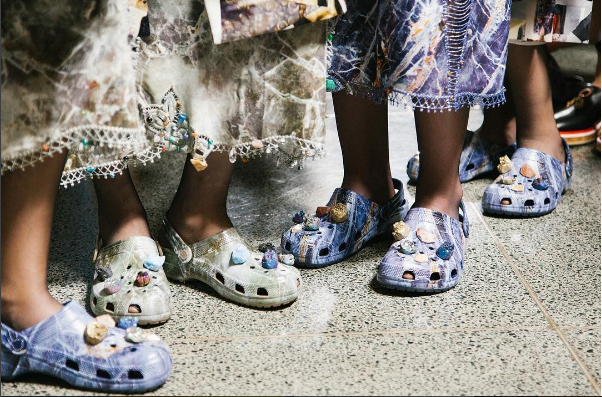 “When Christopher Kane approached us about this opportunity, we were delighted and excited to work together with such an iconic force in the fashion world,” said a spokesperson for the footwear brand. “This collaboration has legs way beyond London Fashion Week, and we're excited to share more details in the near future.”

Fashionistas on Twitter however, were not so enamoured with the collaboration with cries of ‘CROCS WILL NEVER BE STYISH, PLEASE STOP’ and ‘Just because Christopher Kane has put Crocs on the runway does not, and will not ever make them chic.’


Despite the furore, the show was still as luxurious and fabulous as we have come to expect from Kane. Titled ‘Make Do and Mend’ the Spring/Summer 2017 collection was inspired by wartime efficiency, and the sparkling, earthy-toned clogs were not as incongruous among the geometric prints, oversized knits and luxurious fur coats as you might think. Still only time will tell if Kane has started a fashion revolution of if it’s just a load of Croc…

For all the latest trend news subscribe to LOOK magazine

Helen Mirren and Kristen Stewart Get Saucy for Elle
Grab a Subscription and Your Chance to Win £1,000!
Before Her Famous Pout: Photos of Victoria Beckham’s First Photoshoot Emerge