Blair Hints at Political Return on Cover of Esquire

The November issue of Esquire features ex-Prime Minister Tony Blair, who discusses, amongst other things, the Iraq War, Corbyn’s Labour, and a possible return to the frontline of politics… 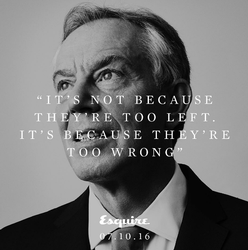 Former PM Tony Blair is Esquire’s November cover star, and with the recent announcement that he was winding down his involvement in business consultancy, rumours that Blair may be considering a return to the frontline of UK politics are beginning to gather pace.

Describing his return as an “open question,” Blair told Esquire that he was “very motivated” to challenge the Conservative government in post-Brexit Britain.

“I don’t know if there’s a role for me . . . there’s a limit to what I want to say about my own position at this moment,” he said. “All I can say is that this is where politics is at. Do I feel strongly about it? Yes, I do. Am I very motivated by that? Yes. Where do I go from here? What exactly do I do?”

When questioned over his support (or lack thereof) for the current Labour party under Corbyn, Blair said it was a question of “two different cultures in one organism.”

“That culture has now taken the leadership of the Labour Party. It’s a huge problem because they live in a world that is very, very remote from the way that broad mass of people really think.”

To see more of Blair's interview, grab a subscription to Esquire - now with up to 44% off.