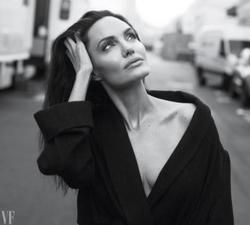 Following the high-profile split between them, both Brad Pitt and Angelina Jolie have been relatively quiet of late. But whilst the former chose GQ to make his media return back in May, the latter has instead graced the cover of Vanity Fair’s Style Issue, and Jolie has opened up about the “difficult” time she’s been having of late.

“It's just been the hardest time, and we're just kind of coming up for air,” Jolie explained, adding that she wasn’t surprised by Pitt’s in-depth interview with GQ, and that her main focus now is on “being a good homemaker” and staying strong for the pair’s six children, of whom she currently has custody.

But the star also shared some health news: she recently had Bell's Palsy, which causes the muscles in part of a person’s face to freeze or droop. She credited acupuncture with reducing the effects of the Bell’s Palsy.

“I can’t tell if it’s menopause or if it’s just been the year I’ve had. Sometimes women in families put themselves last until it manifests itself in their own health,” she told Vanity Fair. “I actually feel like more of a woman because I’m being smart about my choices, and I’m putting my family first, and I’m in charge of my life and my health. I think that’s what makes a woman complete.”

To catch the rest of Angelina’s magazine return, grab a subscription to Vanity Fair – and save up to 46% today.