Brit high-flyer Kate McWilliams becomes one of the youngest airline captains in the world at the tender age of 26...

Kate McWilliams, 26, has become one of the world’s youngest airline captains after a promotion from easyJet. The Carlisle-born pilot began flying at age 13, before joining the British budget airline in May 2011. 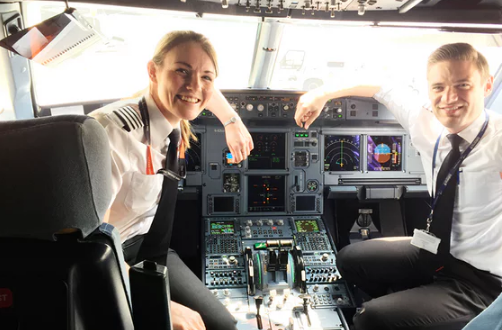 “Personally, I don’t think my age matters,” she told The Guardian, “I’ve been through the same training and passed the same command course as every other captain, so I’ve proven myself capable regardless of my age. I do now get asked how old I am on an almost daily basis, which didn’t used to happen when I was a first officer.”

McWilliams also added that she is asked about her age almost daily by passengers. She flies Airbus A319 and A320 planes to around one hundred destinations worldwide, including Reykjavik and Marrakech.

The new captain is also being hailed as a triumph for easyJet’s scheme to double the proportion of female entrants into the cockpit over the next two years, as currently only 5% of commercial pilots are women.

“Kate’s achievement clearly demonstrates to other young women that it is possible to succeed as a pilot in commercial aviation,” said Julie Westhorp, chair of the British Women Pilots’ Association. “We wish Kate continuing success in her career and are delighted that she is now an excellent role model for other females.”

If you do dream of captaining your own aircraft, grab a subscription to Plane & Pilot magazine, now with up to 73% off.