Things are Looking Up for England Rugby

England clinch their first title in five years, and immediately look ahead to a long-awaited Grand Slam triumph...

It's finally happened - England have won a sporting event! After a hard-fought victory against arch-rivals Wales, new coach Eddie Jones and his boys have clinched the Six Nations title - and you can read all about their triumph in the month's Rugby World magazine, now with up to 27% off. 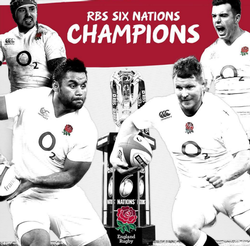 Saturday's 25-21 win over the Welsh propelled England to their first championship since 2011 and with 27 championships now under their belt, England moved one above Wales in terms of how many outright championships they have now won, adding yet another layer to the fantastic victory.

"It's a fantastic acheivement," said Jones, who became England's first ever foreign coach upon his appointment in November, "We've made sure the players are responsible, we play in a style that suits our resources and the players enjoy themselves."

After a dissappointing World Cup display - how many times must the English be subjected to that sentence? - Eddie Jones' appointment has appeared to work wonders. Former England centre Jeremy Guscott said Jones "promised us changes and he's delivered", while ex-Wales fly-half Jonathan Davies added Jones has done "all the right things".

Next up is Saturday's game against France, and if Jones and his team keep up their winning ways we'll be seeing England's first Grand Slam victory since 2003. English sports fans may well have become accustomed to endless years of hurt, but for once it seems that the future of our rugby team looks very bright indeed.