If you don’t like air travel, it’s always good to go with an experienced flyer who you can rely on. In the case of one traveller, that winged wonder is a duck named Daniel Turducken Stinkerbutt, who wears a Captain America diaper, little red booties, and generally just cheers everybody up.

Daniel has since become an internet sensation after pictures of his happy waggling face were posted on Twitter by Mark Essig, who was allocated the seat next door to Daniel. The emotional support duck was the calming companion of a lady suffering with PTSD, and has special permission to fly planes with her to alleviate her fears. 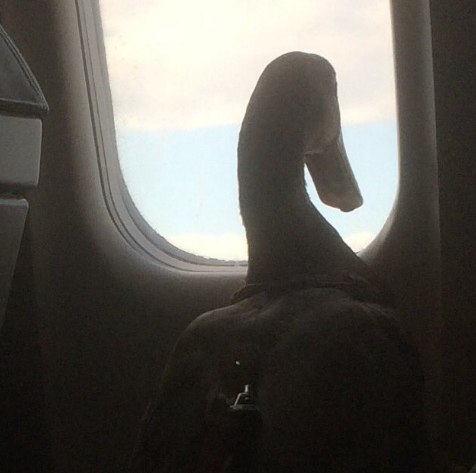 In a more friendly alternative to a certain Samuel L Jackson-fronted animals-on-a-plane scenario, Daniel appeared to like looking out of the window at the passing clouds when he wasn’t providing emotional assurance – not just for his owner, but for the whole plane, and possibly now the world.

If you're absolutely quackers for cute little companions like Daniel, grab a subscription to Fancy Fowl.

Attenborough Returns with Blue Planet Sequel
How Much Do You Know About Orangutans?
Last Rhino Joins Tinder Looking for Love