Miranda Hart's cheery, chatty and occassionally clumsy 'Chummy' will be returning to the flagship BBC show at the end of this year...

Comedienne Miranda Hart will be returning to her character of Camilla ‘Chummy’ Fortescue-Cholmeley-Browne in BBC’s Call the Midwife in time for this year’s Christmas Special and season six, which is due to air next year. The popular actress will be making her first appearance on the flagship show after she left in 2012 to pursue projects in Hollywood. 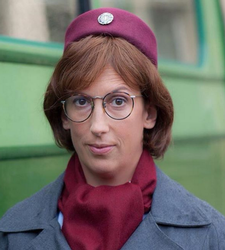 The award-winning show, which charts the work of a team of midwives in East London during the 1950s and onwards, is one of the BBC’s most popular series, with an average audience numbering nearly eight million. A spokesman for the show’s production company said they were “thrilled to be once again working with Miranda and her fabulous blend of warmth, strength and vulnerability, as ‘Chummy’ gets to grips with the medical and social challenges of the 1960s.”

Hart, whose character moved to a mother and baby unit in the show, will join fellow stars Helen George, Judy Parfitt, Laura Main and Bryony Hannah for the new season, which has already begun filming in Cape Town, suggesting that the midwives may be going on an international adventure.

The return of ‘Chummy’ promises to be a heart-warming event, and with fellow star Stephen Mcgann recently telling The Radio Times that the show “will run for as long as people want to see it”, the midwives are showing no sign of slowing down.

If you’re an expectant mother and a fan of the show, check out our range of baby magazines – including Baby London - now with 27% off.