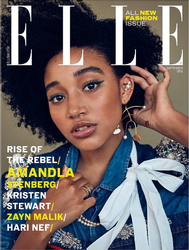 From between the 1st and 6th of July, ELLE readers will be able to pre-order copies of the coveted September issue of the magazine, with five different cover options available to choose from.

The September issue extravaganza will not only mark the beginning of the magazine’s newly revamped existence, but also work as part of a ‘print on demand’ approach to distribution – with new distributors, including Lookfantastic and Space NK now also stocking ELLE.

"These innovations and changes are driven by our deep insight into the demands of our audience,” explained ELLE’s group publishing director Jacqui Cave, “"The redesigned magazine celebrates the unique experience of luxury print, whilst the refreshed Elle website demonstrates our aim of giving consumers inspiring content in a format to suit them."

The new ELLE will feature a host of new contributors and place a greater focus on beauty with a new eight-page-strong directory, as well as a new, updated website.

If you want to get your hands on a special September issue, grab a subscription to ELLE magazine – now with up to 41% off.

Win a £500 Selfridges & Co. voucher
Kenzo Create The Best Perfume Ad Ever, See It Here!
Now You Can Smell Like Kate Moss