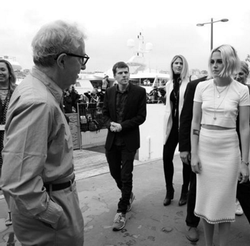 Woody Allen’s latest silver-screen offering, Café Society, received a three-minute standing ovation at the Cannes Film Festival yesterday, as the director and his star-studded cast took to the red carpet.

Café Society, which is set in the 1930s and stars Jesse Eisenberg, Steve Carrell, Blake Lively and Kristen Stewart, is the third film Allen has opened the festival with after 2002’s Hollywood Ending and 2012’s Midnight in Paris.

Café Society is also Allen’s 49th film, and despite being 80 years old the veteran director has no plans yet to retire:

“I’m 80 and I can’t believe it!” Allen said at a news conference yesterday, “I’m so youthful, agile, nimble, spry and mentally alert that it’s astonishing.”

Allen’s female stars dazzled in front of the cameras, with Blake Lively donning a figure-hugging nude gown that showed off her baby bump, and Kristen Stewart wearing a sheer top and bright crimson lipstick.

Other stars who are currently living the high life in France include Victoria Beckham and Eva Longoria, Justin Timberlake, Julianne Moore and Susan Sarandon.

For more information on global cinema, grab a subscription to Film International magazine - now with up to 25% off.