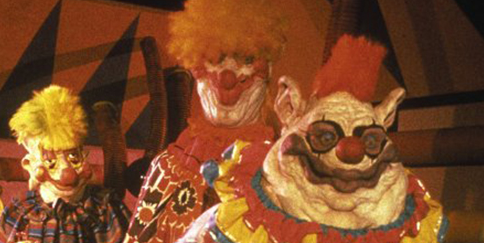 A komet krash-lands from the kosmos and unleashes kreepy Killer Klowns on a small American town. Sure, the look is more plastic than petrifying, but those gaping smiles can induce chills in even the most hardened of folk. Alongside this, rumours still abound that Killer Klowns was the film from which Kris Jenner got the idea for her kid’s consonantally-mixed-up Christian names…

Is Saw’s Billy the Puppet a clown? Does it matter? The little trike-cycling torture-tyke is so damn creepy that whether he counts as an actual clown or not is pretty much beside the point. With his ruddy red cheeks and bright white face, Billy’s antics will probably tap into the same deep-set phobia that the unexpected appearance of a traditional clown inspires.

American Horror Story has reinvigorated the horro genre for TV, and John Carrol Lynch’s character, Twisty the Clown, is possibly the freakiest of all of Ryan Murphy’s creations (with the possible exemption of Season One’s gimp-under-the-bed). 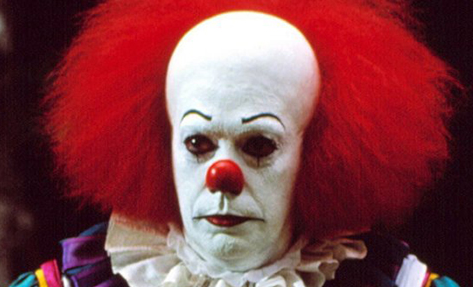 The classic creepy clown. Tim Curry’s menacing voice and Stephen King’s master writing combine to create a horror-movie staple regardless of the lack of CGI or advanced prosthetics. With It currently in the process of undergoing a reboot, it remains to be seen whether modern cinematography can capture the same utter terror that Curry’s clown conveys.

1. Every Clown from Dumbo

Sure, every other clown on this list occupies a spot on every list of creepy circus-freaks ever to have graced the screen, but the animated bunch of bumbling fools that leave cute little Dumbo in a burning building before invading his elephant dreams in bizarre technicolour may well take the biscuit. They then proceed to get blind drunk, proving beyond doubt that beneath every creepy clown is an sauntering, sauce-swigging sociopath.

If you love horror, grab a subscription to Scream.

Birthday Party Announced for West End
Peter Capaldi To Step Down As The Doctor
Gift Guide: For The Whole Family