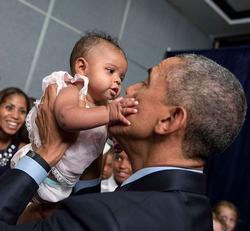 “…This is an extraordinary time to be a woman. The progress we’ve made in the past 100 years, 50 years, and, yes, even the past eight years has made life significantly better for my daughters than it was for my grandmothers. And I say that not just as President but also as a feminist.”

Obama has written an essay for the September issue of Glamour magazine in which he reflects on American women’s long fight for equality, his daughter’s futures and the responsibility of men to fight sexism. “It is absolutely men’s responsibility to fight sexism too,” he wrote for Glamour.

In June the White House hosted the first ever United States of Women summit, during which women met to discuss issues faced by women including the pay gap. Obama is clearly making huge steps for women in America. Perhaps Obama, America’s first black president, is paving the way for the country’s first female president.

First Lady Michelle Obama and the president have always endeavoured to raise their daughters without the constraints gender stereotypes: “Yes, it’s important that their dad is a feminist, because now that’s what they expect of all men”. 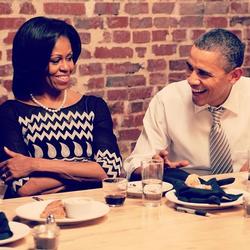 Obama doesn’t just believe that gender stereotypes hurt women, he also described how they can be detrimental to everyone, using his own childhood as an incredibly personal example:

“Growing up without a dad, I spent a lot of time trying to figure out who I was, how the world perceived me, and what kind of man I wanted to be,” Obama penned. “It’s easy to absorb all kinds of messages from society about masculinity and come to believe that there’s a right way and a wrong way to be a man. But as I got older, I realized that my ideas about being a tough guy or cool guy just weren’t me. They were a manifestation of my youth and insecurity. Life became a lot easier when I simply started being myself.”

For the most powerful man in the world to write these words really is an historical moment:

“Rigid notions of identity isn’t good for anybody – men, women, gay, straight, transgender, or otherwise,” he continued. “These stereotypes limit our ability to simply be ourselves… when everybody is equal, we are all more free”. 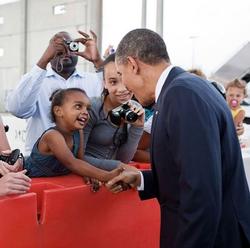