The 'Bad Blood' singer has been partying at Coachella surrounded by her squad...but has her DJ boyfriend finally popped the question? 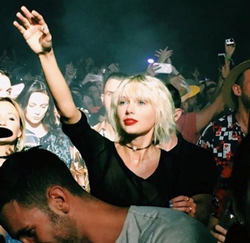 She’s used to striving for platinum albums, but recently Taylor Swift’s been debuting some different types of platinum at Coachella festival. Fresh from showing off her brand new blonde locks on the cover of Vogue magazine, the pop megastar appears to have filled that blank space on her ring finger with some mystery jewellery, prompting a mad frenzy of speculation as to whether she and Calvin Harris may be moving their relationship to the next level.


Having recently described her relationship with Harris as “magical”, Swift has always wanted to keep their relationship “low-key” – which may point to a surprise wedding announcement in the near future for the two new romantics.


The 26-year-old has been living it up at the legendary Californian festival with her so-called ‘girl-squad’ – including models Martha Hunt and Karlie Kloss – meaning that in the possible event of any matrimonial plans on the horizon, competition for bridesmaid places would be fierce.


If you want to catch up on everything to do with Swift’s enduring love story, grab a subscription to Vogue magazine – now with 38% off.

Does Harry Have A Victoria’s Secret?
Why Kate McKinnon is on the up
Jennifer Aniston Speaks Out On Pregnancy Rumours