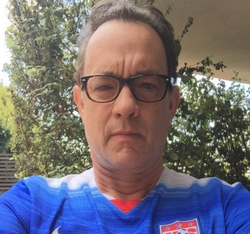 Hollywood’s highest-grossing leading man has joined Watson on the cover of this month’s Esquire  to discuss the actress’ HeforShe campaign in a special Women & Men issue, and, as one of the film industry’s go-to heroes for the last three decades, Hanks will be adding his own considerable gravitas to the discussion surrounding equal rights.

Alongside fellow feminists such as Caitlin Moran and Aziz Anzari, Hanks will presumably be drawing on his experience of playing alongside some of Hollywood’s greatest leading women. The actor, who will star alongside Watson in an upcoming film adaption of Dave Eggers’ The Circle, set for release later this year, represents a major addition to the ongoing conversation surrounding male and female equality in the 21st century.

Hanks has also been busy as of late in a different vein, giving the world an insight into his occasionally bizarre life through the perspective of his Twitter account. ‘Hanx’, as the actor’s internet alter-ego appears to be known, has delighted the internet in recent months by finding student IDs in parks, and documenting the plight of lost items of clothing scattered about New York.

With the Forrest Gump-star highly respected amongst fans from all walks of life, the potential partnership of Hanks and Watson promises to get people listening about the issues in life that really matter.

For more on the celebrity combination that the world didn't know it needed so badly, grab a subscription to Esquire - now with 44% off.