2 hours into the climb, the 20-something wanna-be superhero was yanked through a 21st storey window by waiting coppers… 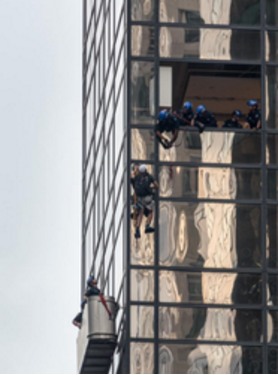 Over 200,000 people were watching the CNN live-stream of the man’s climb last night, as he appeared to attempt to reach the top of Trump Tower (all 58 storeys!) using just some ropes and suction cups.

Two hours into the climb, as the maverick climber reached the 21st storey, police were seen chatting to him through a space made by workers by removing windows from the glass-face building, before the cops grabbed the unfortunate urban mountaineer and wrenched him back into the building in a harrowing moment.

Police described the climber as a 20-year-old man from Virginia who wanted to meet Mr Trump. Police said they did not believe the man intended to harm anyone.

In a YouTube video posted earlier this week he described himself as an "independent researcher" and needed to deliver an "important message" to Mr Trump.

Huge crowds gathered at the foot of the building along Fifth Avenue as the incident unfolded, and cheers went up when the plucky protestor was gobbled up by waiting law enforcement.

"This man performed a ridiculous and dangerous stunt," said Michael Cohen, executive vice-president of the Trump Organization. "I'm 100% certain the NYPD had better things to do."

If you fancy yourself as a bit of a Spiderman, grab a subscription to Climbing magazine*

*Climbing a 58-storey building that in the middle of any city, however, is extremely unadvisable (regardless of whether said building is home to a supervillian or not) and will most likely see you arrested.

Get Ready For The Ryder Cup
The Big Interview: Meet The Editor Of Angler’s Mail, Tim Knight
Get Racing Ahead For Cheltenham