The Duke of Cambridge has become the first royal to appear on the front of an LGBTQ magazine, as a smiling, white-shirted Wills graces the cover of the July edition of Attitude...

Prince William has become the first member of the royal family to appear on the cover of a gay magazine.

The heir to the throne features in the July issue of Attitude magazine, discussing the mental health implications of homophobic, bi-phobic and transphobic bullying. 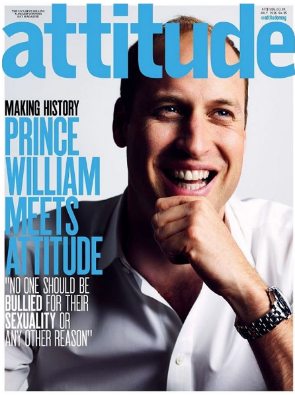 The cover of the magazine shows a smiling William, wearing a white open-necked shirt, with the caption: “Making History, Prince William meets Attitude."

After the cover-shoot the Duke of Cambridge then invited Attitude to bring members of the LGBT+ community to Kensington Palace to hear their experiences of bullying and discuss the impact on their mental health implications.

The shoot came as William, along with the Duchess of Cambridge and Prince Harry, is leading the Heads Together campaign, which aims to end stigma around mental health.

“No one should be bullied for their sexuality or any other reason and no one should have to put up with the kind of hate that these young people have endured in their lives,” said the Duke, “The young gay, lesbian and transgender individuals I met through Attitude are truly brave to speak out and to give hope to people who are going through terrible bullying right now."

“During my time as editor of Attitude I have met parents whose child has taken or lost their life after being bullied for being LGBT+ or just perceived to be LGBT," Attitude editor Matthew Todd said, "I am very happy that the future king of the United Kingdom agrees this must stop.”

To see the Prince’s full feature, grab a subscription to Attitude magazine – now with up to 37% off.