As the brand new Tate Modern gears up for its official opening, a new pyramid-style extension – said to be the most important new cultural building in the capital in twenty years – has been revealed… 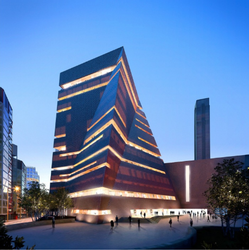 The new, revamped Tate Modern will open on Friday with more “international art, more art by women and amazing new installations,” and ahead of that occasion the Tate has unveiled its latest extension.

The huge, ten storey building will house three new galleries containing 60% more artwork from the Tate’s collection, as well as a panoramic roof terrace. The new building will be known as the Switch House and, at almost 65 metres tall and consisting of 336,000 bricks, will add yet another new dimension to London’s ever-expanding skyline.

Switch House has been designed by Herzog & de Meuron who were the architects behind the transformation of the derelict Bankside Power Station into the Tate back at the turn of the century.

The Tate relaunch will see a complete overhaul of the gallery’s artworks, showcasing more than 300 artists from around 50 countries, including a huge sculpture of a tree by Chinese artist Ai Weiwei that will stand in the centre of the massive Turbine Hall.

For more information on the Tate, grab a subscription to Tate Etc magazine - now with up to 10% off.