Released just two days prior to his death, the cover of David Bowie's last album Blackstar reveals a hidden, starry secret if left under direct sunlight...

In the day immediately following the shocking news that David Bowie had died aged 69, music fans everywhere rejoiced in the knowledge that, at the very least, Bowie had been able to release his last musical offering, Blackstar, into the world. As time went on, it became clear that Blackstar was not just an album - it was Bowie's parting gift to his fans.

Fast forward to now, and Blackstar is still revealing its secrets to us mere mortals. One fan has now discovered that if the record sleeve is left under direct sunlight, the main star will reveal a starry constellation sprawled across it.

“It’s subsided a bit now, but a lot of people said...when it came out, that it took five minutes to design,” cover designer Jonathan Barnbrook said, “But I think there is a misunderstanding about the simplicity.”

“This was a man who was facing his own mortality," he continued, "The Blackstar symbol, rather 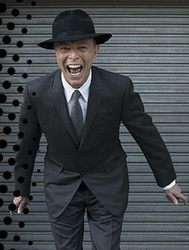 than writing ‘Blackstar,’ has as a sort of finality, a darkness, a simplicity, which is a representation of the music. The idea of mortality is in there, and of course the idea of a black hole sucking in everything, the Big Bang, the start of the universe, if there is an end of the universe. These are things that relate to mortality.”

Blackstar, containing the single Lazarus, which many believe was Bowie's way of confronting his impending death, has quickly become the modern representation of the singer's legendary genius - and it appears that every time we think we have him figured out, even in death Bowie can surprise us all.

For more information on all things vinyl, grab a subscription to Record Collector Magazine - now with 25% off.